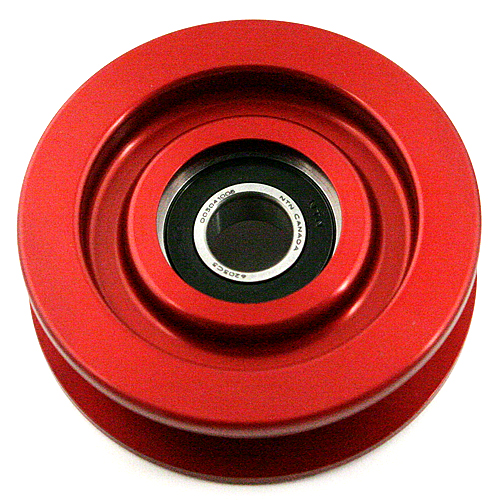 Many of our customers use their trucks with the TRD Supercharger for off road desert racing.  We were asked by them to come up with a solution for the chronic problem of the supercharger belts breaking in this racing venue.

URD investigated this problem and what we discovered why the belts where breaking at an alarming rate.  What is happening is that when the rear tires leave the dirt at full throttle they spin up rapidly and so does the engine, then when the tires make contact again the suddenly slow down.

The URD Tensioner pulley for the TRD 5VZ-FE Supercharger system has tall ears on each side to keep the belt on the pulley in racing conditions.  The URD pulley solves the chronic belt breakage problem in off road racing.

You do not have to be an off road racer to install this upgraded pulley.  Most off our customers that install them don\’t even drive their trucks off road.

The pulley is finished in URD red anodizing to match the other SuperGrip performance pulleys that are available and looks very nice under your hood.

Only logged in customers who have purchased this product may leave a review.

There are no reviews yet.

Save money on new parts

You're good to go! Thanks for signing up.